For the past few weeks, we have been hearing about Pavarotti undergoing further treatment for his pancreatic cancer. The news has been cautiously optimistic, until yesterday when Pavarotti’s condition was reported to have worsened. Today we finally heard the news that Pavarotti has left us. I am sure that in the next few weeks we shall be hearing a lot about Pavarotti, the hymns eulogizing the passing of the great tenor, his flamboyant style, and his no-nonsense, anti-establishment approach to widen the opera fan base.

He was not as politically savvy as Domingo. Nor was he as sexually appealing and attractive as Bocelli. He was the raw, unrefined lion on stage, and the relentless businessman off stage. If everything written about him was true, then he was at least as shrewd and ruthless as Howard Breslin would describe him to be. If his public behavior was any guidance as to who he really was, then he must savor his moments as opera’s royal paladin, as evidenced by his frequent, last-minute cancellations of public appearances in the twilight of his career. He was the womanizer who would dump his wife of 35 years to hook up with his 26-year-old secretary.

But there is no question that Pavarotti was a talented tenor. In my opinion, he was possibly the most naturally talented tenor in the 20th century. Beniamino Gigli and Giuseppe Di Stefano, two of the best tenors of our time, often looked strained and tired when trying to sustain high notes. Domingo, perhaps the modern-day tenor most beloved by opera aficionados, is a great interpreter of opera composer’s works and a great master of tonal quality, but always sounds as though he couldn’t reach a level of vocal projections that he would want, especially between A5 and C6. Without implying to put down any other tenors, Pavarotti seems to have a natural ability to punch high notes with not only rhythmic precision but also superior tonal quality. I am not merely talking about the nine C6s that Pavarotti famously belted out with ease in “Ah! Mes amis,” in Donizetti’s “La Fille du Regiment” at the Met in 1972. I am also talking about how he, in his early years, handled Verdi’s requirement of a Bb5 in pianissimo in “Celeste Aida” in Verdi’s “Aida”. To be sure, Pavarotti wasn’t Franco Corelli, who arguably was the best recorded Radames ever, but Pavarotti never had as nimble a voice as Corelli’s, which made rendering of the pianissimo a lot more manageable. I’m sure when I go back to Pavarotti’s earlier recordings, I would rediscover the beauty of Pavarotti’s voice – a bold but agile voice – like a Ferrari creaming a tight corner or Michael Jordan swooshing a turnaround jumper – effortless to the regular eyes, but magical to those who practice such, day in, day out.

In terms of singing, Pavarotti’s public legacy will be linked to his high notes and his handling of the passaggios. In my opinion, however, his flamboyant and raw style made him the ultimate, purest interpreter of canzone napoletana/italiane: the Marechiares, the O Sole Mios, the Torna a Surrientos of the world, providing a standard upon which all future tenors of the napoletana genre shall be judged. He will, in my mind, forever be linked with the genre, and the genre will, in my mind, always be linked with Pavarotti.
It is incredibly sad to see him go. Had he entered the world in the early 19th century, he would have left us with nothing tangible except a mythical legacy. But he left us with an incredible amount of recorded music that we and future generations will be able to enjoy. Pavarotti the man has left, but Pavarotti the voice will live and grace us forever.

Obituaries: The New York Times, The Washington Post, The Guardian, The AP (via Yahoo! News).
Posted by Mark at 5:49 PM No comments:

The China Philharmonic opened its 2007-2008 Season last night with a heavyweight program featuring the world premiere of a composition by Chinese composer Ye Xiaogang, and the Piano Concerto No. 3 by Sergei Rachmaninoff. 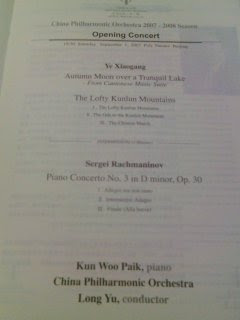 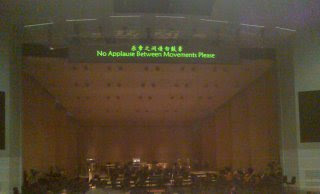 Ye’s new work, The Lofty Kunlun Mountains, is a monumental piece of music commissioned by and written for the China Philharmonic, and was completed barely a month ago. Continuing his ongoing series of scores featuring the customs and cultures of China’s various regions, Ye borrows from Qinghai province’s instrumental and vocal elements to carve out a substantial piece of work with three contrasting symphonic movements. Kunlun Mountains’ orchestral footprint is similar to that of Ye’s other work, Twilight in Tibet, in that Kunlun Mountains weaves through an intricate balance of rapturous Mahlerian moments and delicate pianissimo harmonics to illustrate the imposing and undulating landscapes of the region. The first movement, “The Lofty Kunlun Mountains”, is a testament to Ye’s frequent practice of east-meets-west ideals in which Holstian orchestral frameworks were gorgeously realized through the application of cascading pentatonic scales. The second movement, “The Ode to the Kunlun Mountains”, is an emotional interlude that reminds the audience of the tranquils of Howard Shore’s middle earth. Its baroque, careful string structures also provide perhaps the most poetic and original moment of the three movements. The third movement, “The Chinese March”, is the most symphonically bold, yet also stylistically least interesting, as if the piece tried to gallop to a Khrushchevian closure. In Poly Theatre’s foyer after the concert, I had a brief moment to congratulate Ye on finishing the composition, but I stopped short, for whatever lame reason including, out of deference, of complaining that Kunlun Mountains, while successful in evoking an impressive array of ethnic elements, lacked a fundamentally unique style that I often attribute to the composer's other more satisfying compositions.

Rach 3 was performed by Kun-Woo Paik, a Korean-born pianist most famous for his interpretation of Liszt. Last night’s performance was average, although anyone who knows more than a thing or two about Rach 3 would testify that any pianist who can sprint through the extremely difficult, “finger-breaking” piece without major lapses deserves at least a few rounds of standing ovations. And Paik got his share and more, at least half a dozen of them. Paik’s performance wasn’t necessarily bad –in fact, his rendition of Rachmaninoff’s legato moments in the first movement was as lyrical as any I have ever heard –but, on the overall, Paik’s Rach 3 seems to lack a sense of controlled fragility that seems, at least to me, to be the hallmark of Rachmaninoff’s piece. The third movement was also slow –a tad slower than Ashkenazy’s typical, leisurely pace of 15 minutes and a lot slower than Argerich’s exuberant pace at just over 13 minutes (in the legendary RSO Berlin/Chailly recording). To be sure, nobody will ever accuse a pianist of dragging in a performance, although if Paik had admitted that his performance dragged last night, it would not necessarily have been his fault: there were times when it seems obvious that Paik was trying to race the orchestra to a tempo of his liking, only then to be suppressed by the baton of conductor Long Yu. It was not easy to conclude who dragged and who raced, but there were moments when I had a clear impression that there wasn’t enough communication between the concerto conductor and the concerto performer.

In any case, it was an incredible night not least because it was my first time to listen to classical music in Beijing, but also because I always fancied finding out what kind of crowd I would get at a classical music concert in mainland China. I was quite impressed – other than a slight mishap in which an audience sitting not far behind me felt the need to ruffle his/her plastic bag (whose act was then promptly verbally abused and denounced by other audience members nearby) – the crowd was very courteous, and did not clap, contrary to my earlier expectation, between concerto movements. I went to the concert with Carrie, a smart auditor who often lets her disengaged, emotion-less self spill over to her personal life. So it was only fitting that the highlight of my evening was to see her face light up, and her emotions flow, as she raved about Ye’s sweetness and Rachmaninoff’s genius.
Posted by Mark at 5:51 PM No comments: